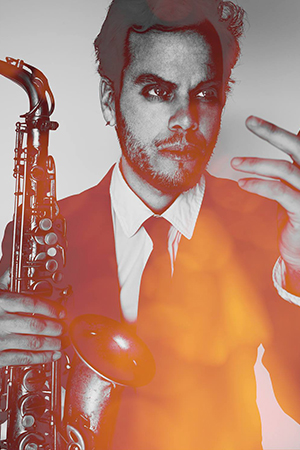 A unique sound ranging from house to ambient music.

Florencio Cruz writes music for saxophone and performs an improvised show where he combines his own experimental sound with house music. He composes and plays a varied repertoire from house and electro-funk to chill-out and ambient music.
Cruz developed his unique sound and technique over more than a decade of playing and performing with well-known artists, DJs and producers in clubs throughout Europe, America and Asia. He has performed alongside Seal, Ne-Yo, Diana Ross, Martin Solveig, Fatboy Slim, Roger Sanchez and Carl Cox. Driven by his musical curiosity and eclectic tastes, Cruz has drawn influences from David Bowie, Brian Eno, Radiohead and even Beethoven, as well as saxophonists such as John Coltrane, Sonny Rollins, Charlie Parker, Maceo Parker, Jan Garbarek and Jackie McLean.
Cruz, who has been based in Zurich since 2011, performs in clubs, corporate and private events and festivals.